Need to see a Consultant?

Chronic obstructive pulmonary disease, or COPD, is a group of lung conditions including bronchitis and emphysema. They make it difficult to empty air out of the lungs because your airways have been narrowed.

Two of these lung conditions are persistent bronchitis and emphysema, which can also occur together.

These processes narrow the airways. This makes it harder to move air in and out as you breathe, and your lungs are less able to take in oxygen and get rid of carbon dioxide. 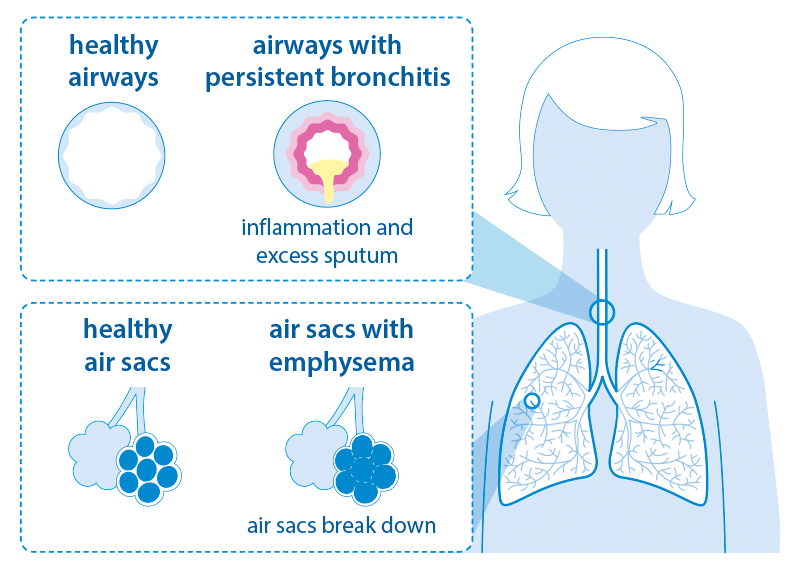 There are treatments to help you breathe more easily, but they can’t reverse the damage to your lungs – so it’s important to get an early diagnosis.

COPD usually develops because of long-term damage to your lungs from breathing in a harmful substance, usually cigarette smoke, as well as smoke from other sources and air pollution.

Jobs where people are exposed to dust, fumes and chemicals can also contribute to developing COPD.

You’re most likely to develop COPD if you’re over 35 and are, or have been, a smoker.

Some people are more affected than others by breathing in noxious materials. COPD does seem to run in families, so if your parents had chest problems then your own risk is higher. A rare genetic condition called alpha-1-antitrypsin deficiency makes people very susceptible to develop COPD at a young age.

The symptoms of COPD include:

You might get these symptoms all the time, or they might appear or get worse when you have an infection or breathe in smoke or fumes.

If you have severe COPD, you can lose your appetite, lose weight and find that your ankles swell.

What’s the difference between COPD and asthma?

With COPD, your airways have become narrowed permanently – inhaled medication can help to open them up to some extent.

With asthma, the narrowing of your airways comes and goes, often when you’re exposed to a trigger – something that irritates your airways – such as tobacco smoke, dust or pollen. Inhaled medication can open your airways fully, prevent symptoms and relieve symptoms by relaxing your airways.

So, if your breathlessness and other symptoms are much better on some days than others, or if you often wake up in the night feeling wheezy, it’s more likely you have asthma.

Your doctor will ask if your breathlessness is brought on by anything, how your daily life is affected and other questions about your general health.

They’ll ask if you’ve smoked and if you’ve been exposed to dust, fumes or chemicals.

Your doctor can check how well your lungs work by arranging a simple test called spirometry. This involves blowing hard into a machine which measures your lung capacity and how quickly you can empty your lungs. This is called the forced expiratory volume in one second, often shortened to FEV1.

Your doctor will use spirometry to measure how narrow your airways are. But this only covers one aspect. Someone with slightly narrowed airways can be more breathless than someone with very narrow airways depending on their level of fitness and the exact way COPD has damaged their lungs.

Other tests for COPD

Your doctor should arrange for you to have a blood test and a chest X-ray to rule out other causes of your symptoms. Your doctor will calculate your body mass index (BMI) to find out if you’re a healthy weight for your height. This is important because you can deal with your COPD better if you’re not underweight or overweight.

You may do more tests to give a better picture of your condition, covering:

You may also see other health care professionals who can help you to manage your condition: